We’ve made a few more purchases since my last portfolio snapshot, and some readers have been inquiring about them, so it’s time for an update.

I haven’t sold any of my holdings yet, and I don’t plan to; everything in the previous post still applies. I also haven’t bought any more individual stocks, so I won’t be updating the second part of the previous snapshot. The exciting parts of the recent acquisitions were participating in my first IPO (Initial Public Offering), and buying relatively large (for me) investments through an Equity Builder loan. I’ll go into more details about the loan itself in a future blog post, so today I’m just going into the actual shares.

In June I got the Equity Builder loan from NAB and borrowed $30,000. I know that’s a relatively meagre loan in the grand scheme of things, but as a first loan to get my toes wet, it was pretty exciting. It also plays a role in my 7-year plan. The first purchase was $10,000 worth of shares in Milton Corporation (ASX:MLT). Milton isn’t drastically different from my other main LIC holdings, but I got attracted to it after reading Strong Money Australia’s LIC review, particularly the part about Milton having grown its dividends faster than inflation for more than 60 years. As I’m trying to create a passive income stream for retirement, that’s a glowing neon “Buy!” sign for me. I’m confident that the income stream it provides will hold steady and maintain its purchasing power into the long distant future. The share price has grown slowly but steadily since I bought it, albeit with the standard ex-dividend slump, and I’m pretty happy with it so far.

I also bought the same sized chunk of Vanguard’s Australian shares ETF (ASX:VAS). It probably rubs purists up the wrong way in both the LIC camp and the Boglehead camp, but I’m happy splitting my funds between both. With $10,000 going into each of MLT and VAS, I get a solid core investment in Australian large-cap equities, along with structural diversification. I still like LICs, particularly the big old school ones with smooth dividends, but I’m not one-eyed about the active management approach. I also like the general idea of buying the index and getting the whole mixed bag that comes with it. I think both approaches have great strengths and unique risks, so I’m fine with dabbling in both. I’ll probably write a lengthier post addressing how I see this as a false dichotomy sometime later.

The final $10,000 of the Equity Builder loan went towards increasing my holdings of Vanguard’s global shares ETF (ASX:VGS), quadrupling it’s weight in my portfolio. I know that everyone has different ideas about how much international diversification to have, and I’m not really fixed on a specific number, but I like where this sits at the moment. I also don’t mind the yield being lower than Australian shares, at around 2.5%, because I expect the growth to make up the difference, and over a long time horizon that growth should also push the dividends on this higher than my ASX investments. VGS is now my largest single investment, and coincidentally it’s also my best performing, which makes me feel all warm and fuzzy inside! 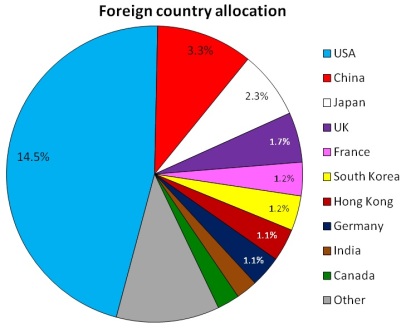 My most exciting purchase was a small chunk of shares in WAM Global (ASX:WGB), the newest LIC from the Wilson Asset Management group. In June I applied for a modest entitlement in their launch, only for the minimum investment of 1,000 shares at $2.20 each. This was quite a thrill for me, getting into an IPO for the first time. WAM LICs generate a lot of polarised opinions, and IPOs are always a bit riskier than tried and tested investments, but I had a little bit of money earmarked for a higher risk appetite and wanted to try something new. Despite the risks, I consider it a solid investment choice, due to being a diversified holding and also because of the Wilson methodology which has proven results. Although of course, past performance can’t guarantee bla bla bla…

I already had a chunk of WAM Capital, and it’s done very nicely for me. It has had reasonably strong growth in the few months that I’ve held it, and stunning growth in the years prior to that. I also like the small discount on the Dividend Reinvestment Plan (DRP), which strengthens the compounding accumulation over time. Of course, WAM Global probably won’t pay any dividends for a while, so I’m not expecting much excitement in the short term. But they have declared their intention to follow the same methodology, and aim to provide a growing stream of fully franked dividends. I’m attracted to that opportunity to have some international diversification that also suits my dividend growth goals. It’s far too early to comment on WGB’s actual performance yet, and I get the feeling that the invisible hand of the market is also waiting to see what happens, because the share price has hardly budged from it’s $2.20 launching point. All we’ve seen so far is the preliminary breakdown of investments, which are so far focused on large markets. I’m looking forward to their first annual report.

My only serious (read: diversified) holding that has significantly shrunk has been my Vanguard Asian shares ETF (ASX:VAE). It’s down 7% since we bought it. I like having exposure to the Asian emerging markets, but I was unfortunate in buying right before Trump decided to launch into a trade war with China. Since then the share price has taken a hit every time either side has so much as mentioned tariffs. Nevertheless, it’s a long term investment, so I can ignore the short term noise.

In addition to the purchases described above, some of my holdings have grown slightly due to Dividend Reinvestment Plan (DRP) accumulation. We’ve received 32 new shares of AFI, 13 of ARG, 48 of MLT, and a whopping one (1) additional share of VGS! I’m a huge fan of using DRPs to gradually compound my portfolio. For me it evokes a glorious feeling of incrementally building a Perpetual Motion Machine. I also like how it prevents you from trying to time the market using manual reinvestment of your dividends, by turning an emotionally fraught decision into a cold, rational, automated process. 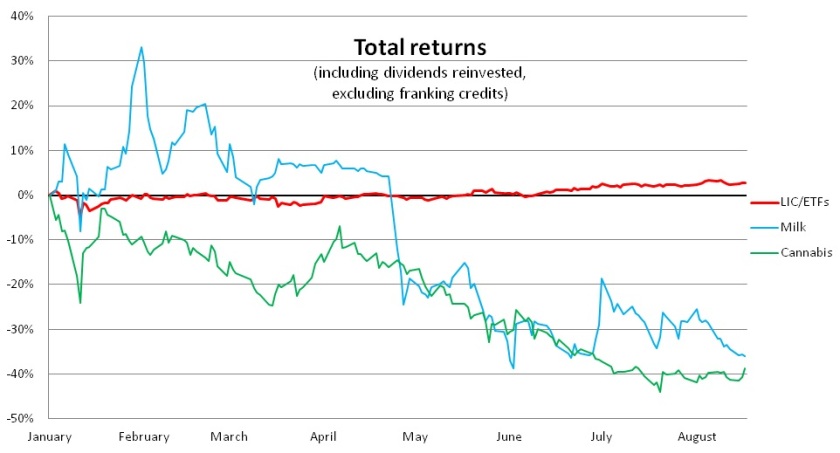 The individual stocks in my portfolio continue their slow and miserable slide into oblivion. I consider it a lesson well learnt; I have no intention of adding any more speculative purchases, so the only question is whether to keep holding or to cut my losses. For the time being, I’m going to hold onto them, as an experiment, and in the hope that they turn out to be long term surprises. Besides, the loss ain’t real until you sell, right?

Disclaimer:
I’m invested in all the above mentioned stocks, obviously. Do your own research before investing.