All the cool bloggers are doing them, so here’s my humble portfolio snapshot.  We have pie charts! It’s not much, and it hasn’t done very well so far, but it’s a start and I’m proud of it. Despite the portfolio being only a few months old, it’s already grown quite complicated, so I’m splitting this into two posts, starting with a snapshot of my diversified holdings: Licensed Investment Companies (LICs) and Exchange Traded Funds (ETFs). If those terms are new to you, all you need to know so far is that they are stocks which themselves hold underlying shares in many different companies.

I was really excited to get in on the share market action. My first purchase was following the advice of the Barefoot Investor: I bought $5000 worth of shares in Australian Foundation Investment Company (ASX:AFI). I did a tiny bit of research into it beforehand, got confused by all the terms flying around, and decided to just jump in. I still think AFI was a solid choice, and I’ve bought another chunk of shares in it since then, after increasing my knowledge significantly. AFI has a long term strategy of buying and holding many of the biggest companies on the Australian stock exchange (ASX) and earning profits from the dividends it receives from those companies. Unfortunately, I first bought in at what now seems like a market peak: I paid $6.34 per share in mid-January, then watched as the share price began gradually eroding. I console myself that it’s a buy-&-hold-forever investment, so the share price isn’t a big deal, but it was a disappointing blow to my newfound investing confidence. The second chunk I bought in April for $6.00 per share, and so far the price has held steady at that point, so I’m a bit happier with the timing of that tranche. It’s now sitting at $6.01, but I’ve also had a dividend payment already which I excitedly reinvested for 12 extra shares. As I write this, including the dividend and the brokerage fees, I’m down -2.37% on AFI, but I’m still happy about it.

After that I started researching other stock options. I discovered a couple of great Aussie finance blogs which inspired me to focus on ETFs and LICs to get the benefits of diversification and dividends. For international exposure I bought a smaller chunk this time of Vanguard‘s Global Shares ETF (ASX:VGS). For dividend yield I bought WAM Capital (ASX:WAM). Both of these purchases have done reasonably well, and today they’re the only stocks in the green in a portfolio of 12 different stocks. The VGS is pretty uncontroversial; everyone and their dog seems to get behind it. (With the sole exception of Aussie Firebug, who holds VTS and VEU instead. I’ll write a longer explanation later of why I still prefer VGS over VTS + VEU, but meanwhile you can read about Aussie Firebug’s reasoning here.) I bought VGS at $67.03 per share, and it’s now at $68.21, so that’s officially green, baby! It’s given me an $8 dividend too; that’s the total dividend, not per share; not even close to being enough to reinvest into a single extra share. I bought WAM at $2.41, and it’s now at $2.37, but it paid a fantastic dividend and gave a 2.5% discount on its Dividend Reinvestment Plan, so the reinvested dividend is enough to put me back into the green on total returns. In total returns my VGS is currently up +0.11%, and my WAM is up +1.20%.

More recently, in a much less inflated market phase, in mid-May I bought $5000 each of Argo Investments (ASX:ARG) and Vanguard Asian Shares ETF (ASX:VAE). I bought ARG as effectively an extra chunk of AFI shares, as I consider them fairly equivalent to each other. The underlying holdings of both LICs are very similar, so their performance generally lines up. Strong Money Australia’s done a great review analysing ARG and contrasting it with AFI, but I’m not really that concerned about the small sector allocation differences. My reason for getting both, instead of just doubling up on AFI, is that they periodically offer Share Purchase Plans, sometimes at a discount, so there’s some strategic value in holding both, for access to both of their SPPs. It also provides a tiny amount of diversification of the key man risk inherent in actively managed LICs, although both AFI and ARG are very passive in their activate management strategies so I think the key man risk is minimal for both. Again the ETF is probably the less controversial purchase, going by the general Boglehead trend of the online investing community. I got the VAE to extend and complement my VGS, further diversifying internationally. I don’t think anyone knows which part of the world’s markets will grow best in the future, but I think Asia is currently very strong and has a good chance of pulling ahead of the developed West in years to come. My ARG is currently at -1.69% and my VAE is at -1.43%, but those losses are mostly because of brokerage fees.

That’s currently the extent of my LIC and ETF holdings. They’re all long term investments, and I’m mostly focused on growing dividend streams, so I’m very happy with all of them despite their less than impressive performance so far. WAM’s dividend yield of ~6.5% (extrapolating one dividend into a full year) grosses up to more than 9% once franking credits are taken into account. AFI and ARG, both around 4% yield grossing up to ~5.7%, have terrific (and long!) histories of slow but steady dividend growth, with impressively low dividend volatility even in the face of financial crises. Of course VGS and VAE pay much lower dividends, ~2.5% and unfranked, but on the other hand I expect them to grow much more than the Australian market. Hopefully that will eventually push their dividend yields, when compared with the base prices I paid for them, much higher than my Australian investments. With a 30 to 40 year investment horizon, I think it’s worth holding some low yielding growth stocks and giving them the time to let the power of compounding work its magic.

Even though this is only Part 1 of my portfolio, no snapshot would be complete without some charts. Besides, who doesn’t love pie? 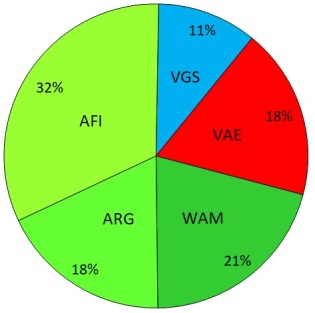 For regional allocation, all the LICs in the above chart are Australian stocks, and the ETFs are international, which gives me a home bias allocation of 71%. (It’s actually a bit higher than that, because this isn’t including the invidual stocks in my portfolio, but I’ll go into that in the next post.) I’m very comfortable being heavy in Aussie stocks, because my ultimate goal is to retire and live off the dividends (Carpe Dividendum!), without having to draw down on my portfolio.

I know it looks like I’m overweight Asia and underweight USA, but that’s because, when I bought the VAE, I was already planning to put another $10K into the Vanguard Global Shares ETF. Once that goes through, I think the country balance will look better. Besides lacking enough American stocks, I’m also underweight on Japan and Europe, but those will be fixed with my next chunk of VGS. I’ll probably write a longer piece sometime about my regional allocation, but for now I don’t think it’s much of an issue. To be honest, I’m not really fussed about exact balances, I don’t have a target allocation in mind, and I certainly won’t waste tax efficiency selling anything to maintain a balanced allocation. I plan to roughly rebalance only when buying.

Below is the aggregate capital growth, if I may be so bold as to use the word growth for something that clearly hasn’t grown, of my LIC and ETF portfolio so far. This is total accumulation, so it includes reinvested dividends. As you can see, I either lucked out with the timing, or got stung by my ignorance, depending on whether you believe market timing is a matter of chance or skill. I suspect it’s a bit of a both. But whatever the reason, it turned out that I bought most of the shares in late January at a marked high point in the markets, and it’s been almost all downhill from there.  That sharp drop in the first week of February was a nasty shock! But I’m in it for the long haul, and it’s very early days, so *shrug* c’est la vie. 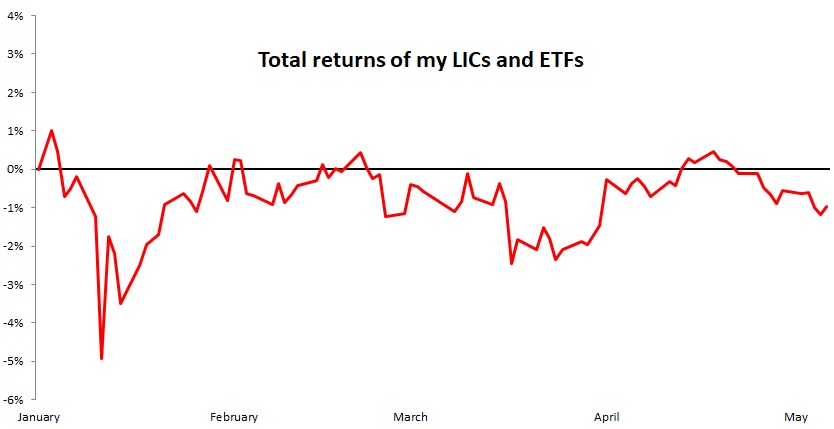 So what can I learn from that chart? Bugger all. It’s just white noise, especially over such a short period of time. I should stop checking the prices, and just kick back and wait for the dividends to roll in, and keep saving and buying as much as I can. Maybe check back in on the share prices once every decade or so. But I’m a sucker for wiggly lines. And in fact, it’s not even very wiggly. In my next post I’ll overlay that same line with the matching line for my speculative stocks, and you’ll see just how un-volatile my LIC and ETF holdings have been.

Stay tuned for Part 2 of my maiden portfolio snapshot, where I go through all of the disastrous individual meme stocks I’ve bought, and why I don’t regret them despite losing significant sums of money in a very short time!

Disclaimer:
Obviously I’m invested in all of the shares mentioned above. So please buy buy buy, and make me rich! Or don’t, whatever.
Nothing in this post should be considered financial advice. I’m just a novice investment nerd. Please do your own research or seek professional advice before investing.